Lewis Hamilton set the pace on the final day of pre-season testing in Bahrain to underline his Mercedes team’s status as favourites for the season-opener in Australia.

Hamilton was just 0.06 seconds off the fastest time of the winter, set by Williams’s Felipe Massa on Saturday.

Valtteri Bottas was second fastest on Sunday, showing Williams, who had a poor 2013 season, could cause an upset. Ferrari’s Fernando Alonso was third while Red Bull’s struggles continued.

But after the car failed to complete even one lap on Saturday, it was a better day for Red Bull in terms of reliability – the world champion completed 77 laps, his highest mileage of the winter on a single day.

How they finished on day four

“I’m happy we did a lot of laps,” Vettel said. “We would love some more laps but testing is over so we have to do more laps down under [when the season starts in Melbourne on 16 March].”

Mercedes driver Lewis Hamilton expects Red Bull to be contenders this year despite a disastrous pre-season testing programme. Red Bull have staggered from problem to problem through the three winter tests.

But Hamilton said: “They look like they have a stunning car and usually the more beautiful it is, the faster it is.

“So I’m sure they’ve got a pretty quick car. Once they get the engine sorted, or the systems they might be struggling with, they’ll be very hard to beat.”

Pre-season testing ended in Bahrain on Sunday with Hamilton, 29, setting the fastest time.

The 2008 world champion said he was hopeful Mercedes would be contenders this season, which sees the biggest rule changes in a generation with the introduction of turbo hybrid engines and a fuel limit.

“I know my team is stronger than ever so hopefully we’ll be able to fight with them,” Hamilton said. 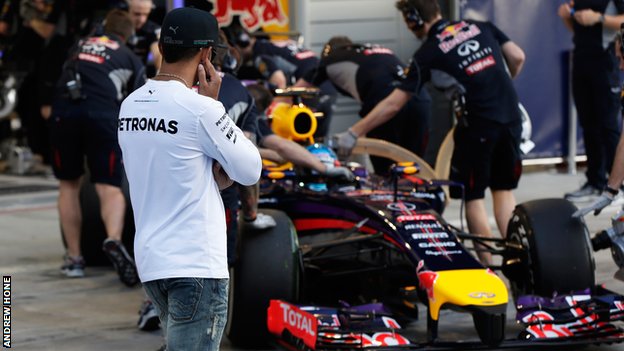 “I don’t think anyone will feel ready but I am as ready as I can be, I’m still learning how to set the car up but I feel like I’m in a pretty good position. There is a lot more to come.”

Hamilton said the new rules and the reliability problems associated with introducing such complex new engines made it difficult to predict who would start the season on top in Australia on 14-16 March.

Ferrari team principal Stefano Domenicali said he thought Mercedes and Williams, who use Mercedes engines, had looked the strongest teams in testing.

“Mercedes and Williams seem to be in very good shape,” Domenicali said. “That is what we have seen so far.

“I think we have a good base and we need to develop it and make sure we solve all the things that are on the table, there is a lot of potential to be deployed or discovered.

“This is the objective our engineers have to fix as soon as possible because the points we will score at the beginning of the season will be very heavy, even if they are not double.

“There are some teams who have shown they are a little bit ahead of the others but let’s wait and see when it counts.”

Domenicali said he was hopeful Ferrari could compete for the championship with their all-star driver line-up of Fernando Alonso and Kimi Raikkonen.

“In such an environment where the new power-train has been introduced we have seen Mercedes acting very well so far,” Domenicali said. “But they are a monster, we are smaller, and we want to show even if we are smaller we can do a fantastic job.”