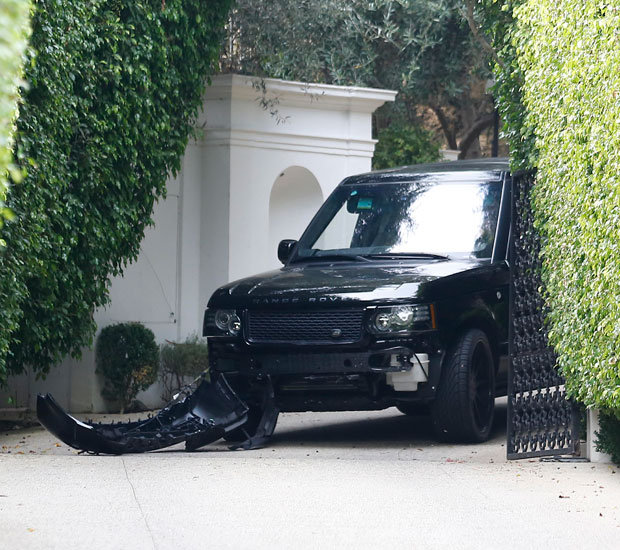 David Beckham bashes his motor outside his Beverley Hills mansion….it’s moments like the one this on Friday afternoon outside his palatial home that remind us that Beckham is still human.

Police were called to the scene after Beckham, 38, appeared to have pulled out of the hedge-lined driveway to his mansion and immediately collided head-on with a another car.

Former England captain Beckham, was behind the wheel of his black Range Rover Sport, and had 14-year-old son Brooklyn in the front passenger seat with him, according to local media.

No one seemed to have been injured in the crash, though photos captured by a reporter on the scene for X17online.com showed significant damage to the front of both cars involved.

The other vehicle was a white Acura, also a high-end 4×4, driven by an unidentified woman.

According to The Daily Express‘ Kelby McNally, Beckham and his 14-year-old son, Brooklyn were involved in a minor car accident right outside of the star’s driveway at around 2:30 p.m. local time on Friday.

No one was injured but Beckham’s Range Rover will definitely need a new front bumper!!!!!

TMZ reports that 38-year-old Beckham is believed to be the driver at fault as witnesses say he pulled out of his driveway and into the street, hitting a white Acura that was passing by.

Photos obtained by The Daily Express reveal that police arrived shortly after to survey the damage. Remember, this isn’t the first time Beckham and his son have been involved in a car accident together. McNally reminds us that in 2011 the pair were involved in a multiple-car pile-up in Los Angeles!!!

The Daily Star‘s Nicole Morley reports that Beckham’s ride is only three years old and is worth roughly $60,000.

But we can assume that he’s properly insured and will be back on the road in no time. And while incidents like this will always bring about a headache for Beckham and his family, at least the driver of the other SUV will have an unbelievable story to tell around the fire this holiday season.

In the end, all that matters is that Becks, his son and everyone else involved came away unharmed.