A field of 22 will go to post for the traditional flat season curtain raiser. Run over a straight mile the race is for thoroughbreds aged four and over…… it dates back to 1853 when the race was actually run in Lincoln and moved to Donny when that course closed in 1965.

Let’s check the stats and trends for this one…

Draw doesn’t seem all important, although it appears to favour those who follow the early pace….looking here the pace horses are Beach Bar and Lat Hawill drawn 9 & 5 respectively, so we would tentatively say that the low numbers would be fancied. Having said that we will look to pick one form each side of that early pace.

Bravo Zolo won LTO making all the running at Wolverhampton in February and the form of that race looks good with three of the top 5 winning next time out and the booking of Ryan Moore a bonus and on offer at 10’s.

Lord Of The Land represents O’Meara who last term ran Mondialiste, who finished second before going onto to run a fantastic Breeders Mile. This one comes in from Andre Fabre and has beaten a listed race winner (Don Bosco) so could potentially be a handicap good thing albeit as market leader at 4’s has no value appeal.

Birdman also represents O’Meara who climbed up the rankings last year and looks to go on any ground, the booking of smart claimer Josh Doyle is a plus, whilst the very high draw questionable.

Mutarakez is an early season type who’s season finished at Royal Ascot and has been gelded since and really appeals. His races have produced good winners next time out and he is not drawn too high…..like last years runner up Mondialiste, he could rise the weights this term to better than a handicapper

Express Himself ran a best effort LTO and is a hold up type who will come late off the pace but who appeared to struggle when put in Class 2’s.

Top weight Heaven’s Guest, handles soft going but will have it all to do off 106 despite the low draw.

Farlow is one who appears better at 6 and 7f and perhaps Rene Mathis is his best shot and another who appreciates this going.

Man of Harlech ran a good 4th in the Cambridgeshire giving him some good big race form and another liking a bit of cut and one should be one to keep on the right side this term, if not today

One who frustrated for us last year is Emell, he loves to be covered up in a big field and can come with a late charge….usually bloody failing!!!!!….he could be one for us off a big price but again a very high draw goes against him?

Godolphin are represented by Udododontu who finished 2nd at Royal Ascot last summer but is now up a stone in the weights but a place contender all the same.

Mutarakez 1pt EW @ 9/1 with SkyBet in the Lincoln 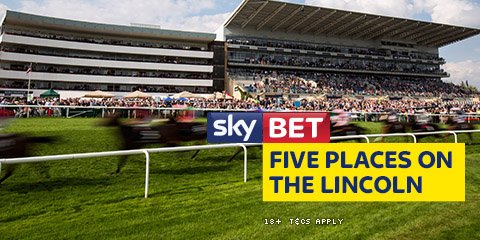