Sunderland progressed to the semi-final of the Capital One Cup with a thrilling extra-time victory over Chelsea.

Chelsea dominated the majority of the 90 minutes, though their goal was fortuitous, with Lee Cattermole poking the ball into his own goal.

The Blues seemed to be heading to the last four until a late Fabio Borini equaliser took the match to extra time.

From then on the Premier League strugglers were the better side with Ki Sung-Yueng’s thumping winner deserved.

Extra time was a scenario Jose Mourinho would have dreaded as the Chelsea manager had already been lamenting his team’s packed schedule, pointing out that league leaders Arsenal had a few days extra to prepare for Monday’s Premier League fixture between the two sides.

But Chelsea, who wasted a number of opportunities in a match they dominated for long periods, only had themselves to blame for prolonging what had been a tedious match up until Borini’s dramatic strike.

The tireless Black Cats frustrated a Chelsea side which was much changed from the one which beat Crystal Palace in the league on Saturday. But whatever personnel the Portuguese chooses, it continues to be the same story for a team which has too often been toothless this season.

Despite an array of attacking talents in the Chelsea squad, it seems Mourinho has no-one at his disposal with the ruthlessness to kill off a game, with the former Real Madrid man particularly critical of his strikers of late.

Mourinho began with Willian, Samuel Eto’o and Andre Schurrle leading the attack and when those three failed he brought on Demba Ba and Eden Hazard towards the end of the second half, but neither made an impression.

Sunderland will be bottom of the Premier League on Christmas Day regardless of their achievements in the League Cup.

But manager Gus Poyet regarded this quarter-final as an opportunity to galvanize his players for the club’s fight for top-flight survival, and the Uruguayan will surely be heartened by his players’ character and courage during what was a demanding 120 minutes. 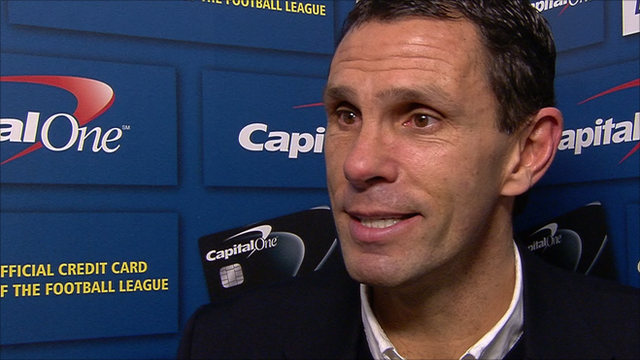 Beating Chelsea will inspire us – Poyet

Willian, who had the freedom to float around the pitch, was the away team’s most potent player and had the best chance of the first half when he dragged his effort wide of the far post.

Mark Schwarzer was underemployed in the Chelsea goal. A penalty appeal for a Cesar Azpilicueta handball was all the sparse 20,000 crowd had to shout about until Borini rewrote the script.

Chelsea had far more zip in the second half, with Cattermole’s own goal giving the visitors the boost they needed.

Goal decision system technology was used before deciding whether to allow the goal, and replays also showed that Cattermole, rather than Frank Lampard, had the final touch as both players slid goalwards in chase of Azpilicueta’s fine cross.

The own goal was Sunderland’s sixth of the season – an ever-increasing number which has already left manager Poyet cursing his players’ positioning rather than bad luck.

It was all Chelsea as Eto’o, Schurrle and Ba went close to doubling the visitors lead, but the Londoners were not clinical enough and paid the price as Borini squeezed the ball home to force the match into extra time.

From then on the momentum was with Sunderland. The Italian scuffed a further two chances, while a brilliant one-handed save from Schwarzer prevented Ki’s diving header from finding the net.

But the veteran Australian could do little to prevent the midfielder from securing a memorable victory.

“I’m pleased for the players and I’m delighted for the fans. This has been a very hard season for the fans, but when you find yourselves in the semi-finals, that’s something to enjoy.

“That’s the way we are going to do it. It’s important I can see that the players are doing it all the time.

“Even in extra time, even in the last two or three minutes, they were not trying just to go crazy.

“We are trying to play a game because I believe it works, and now we have to do that every week, every game.

“It doesn’t matter who you play against at every level, if it’s Norwich or if it’s Carlisle in the FA Cup, every single day, and the more we do it, the more difficult we are going to become to play against, I am sure.”