Capital One Cup Round 4: Wrap & Draw

Capital One Cup Round 4: Wrap & Draw 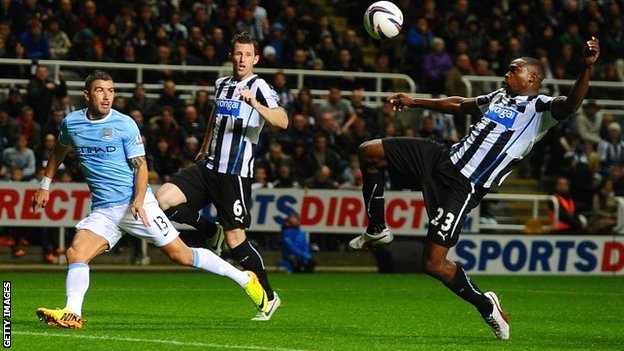 Alvaro Negredo and Edin Dzeko scored in extra time to earn Manchester City a place in the Capital One Cup last eight at the expense of Newcastle.

Dzeko then rounded Tim Krul after a slick move as City secured their ninth successive win over the Magpies.

Joleon Lescott cleared a Hatem Ben Arfa shot off the line as the game came to a finish but City progressed safely to a quarter-final meeting with Championship side Leicester.

The two late goals by the visitors offered flashes of quality after both teams had laboured in front of goal during normal time.

It was a game that was a far cry from City’s 4-0 win over the Magpies in their first game of the season. City – who made 10 changes to the side that lost to Chelsea on Sunday – offered less of a threat than the hosts for most of the match, and relied on two fine saves by Pantilimon to keep them in the tie.

The Romanian had been expected to feature, having played in the last round, but his performance will give City boss Manuel Pellegrini something to ponder after a Joe Hart error gifted Chelsea victory at Stamford Bridge. It was City’s first clean sheet in seven games.

Cisse twice wasted good chances for Newcastle in the first half as he lobbed the ball wide after the industrious Ameobi flicked on Krul’s kick, and miscued a shot from close-range. It continues a poor run in front of goal for the Senegalese forward, who has managed one goal in his past 15 games.

The visitors lost Stevan Jovetic to what looked like a calf injury early on and although Negredo joined Dzeko in attack, City were missing the punch provided by the rested Yaya Toure and Sergio Aguero.

Right-back Micah Richards, who captained the side, headed over from a promising position early in the second half before City almost took the lead against the run of play – Krul misjudging a through ball down the right but Milner failing to find the target with the goal gaping.

Once David Silva was introduced after the hour, City began to offer a greater threat, with Negredo twice going close.

Nevertheless, Newcastle should have gone ahead in the first period of extra time, but again Cisse was wasteful. The Newcastle forward was found expertly by substitute Ben Arfa but Pantilimon clawed his shot away.

The Magpies having spurned that chance, Spanish forward Negredo finally took advantage, leaving Mapou Yanga-Mbiwa flat-footed for the first before Milner exchanged passes with Silva to set up Dzeko, who sealed it 15 minutes left.

“We’re obviously disappointed not to score. We played well enough to warrant a goal and I couldn’t ask more from the players.

“The performance level was really high but it was a hard match so it is a shame we didn’t get our noses in front.

“We had a really big, big chance at the start of extra time and that first goal is critical at that point because people are getting tired and it is very difficult to claw it back. Unfortunately for us they scored it.”