Man City completed the most one-sided Capital One Cup semi-final with an easy 3-0 victory over West Ham United.

City will now await either city rivals Manchester United or Sunderland in the final atWembley after they completed a 9-0 aggregate victory with insouciant ease.

Alvaro Negredo scored his 22nd and 23rd goals of the season at Upton Park, with striker partner Sergio Aguero chipping in one of his own in between those finishes, as even a face-saving second leg victory (or draw) eluded the abject Hammers.

You can’t do mistakes at this level to the level we did, far too many errors in our half—there was a fair bit of action in Man City’s box, but no clear cut chances for the amount of time we had in their final third.

The second leg of the other semi-final takes place on Wednesday evening at OldTrafford, with Sunderland holding a 2-1 advantage.

Heading into the second leg of this tie, however, West Ham faced a near-impossible task to turn the tie after infamously slumping to a 6-0 loss at the City of Manchester Stadium. Confronted by a Manchester City side featuring Aguero and Negredo up front—and backed by a near-empty ground as a result of the state of the tie and the unreduced cost of tickets—West Ham knew they were playing for little more than pride. 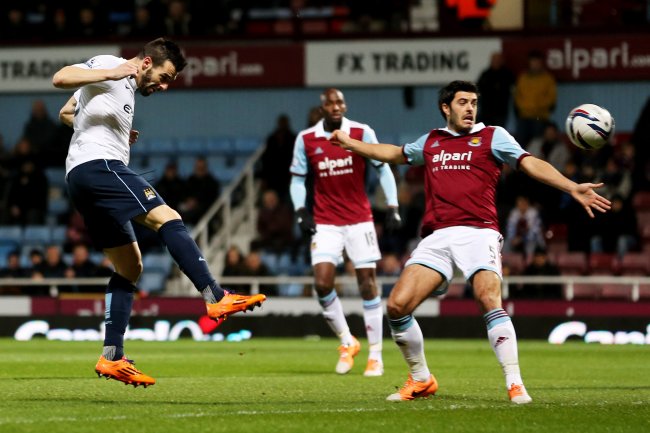 Allardyce attempted to get a foothold in the game with Andy Carroll proving to be a nuisance up front and Ravel Morrison attempting to keep the City defence on thebackfoot, but they rarely troubled Costel Pantilimon’s goal.

Carroll, in his first start of the season, saw plenty of ball in the first-half but lacked support up front, while City went about their business in a ruthless fashion. The scoreboard was troubled just three minutes into the match when Negredo nodded home at the far post—with slack defending allowing him plenty of time on the ball, much to the annoyance of Allardyce.

The away support had to wait until the 24th minute to see City double their lead, when good work from Marcos Lopes—impressing in a rare taste of senior first-team football—saw Aguero teed up, as he slipped round a few defenders and coolly chipped over the advancing Jussi Jaaskelainen.

The second-half saw Carlton Cole come on for Carroll, with no doubt one eye on next week’s Premier League match against Chelsea, while Joe Cole lasted just 90 seconds before also being replaced by Stewart Downing. The changes proved too little to the tide of the game and Negredo doubled his tally, adding City’s third in the 59th minute of the match, as he tucked home from close range after bullying the disorganised Hammers backline.

Aguero soon withdrew to allow Stevan Jovetic a chance to improve his match fitness, while Jack Rodwell also came on for Javi Garcia for a valuable 30 minutes of game time. Further goals were not forthcoming, but Manuel Pellegrini’s side retained a vice-like grip on proceedings—with a possible shoulder injury to Negredo in the closing stages about the only moment that might yet prove to cause some concern forPellegrini.

West Ham, too, had their injury woe—as midfielder Mohamed Diame was stretchered off in the closing minutes with a leg injury. It was another blow for Allardyce on a night full of them.

Soon, the final whistle blew, and Diame’s team-mates were left to trudge off and lick their wounds.

This is a tie they will quickly want to forget. Whether they will be able to, however, is a different matter. 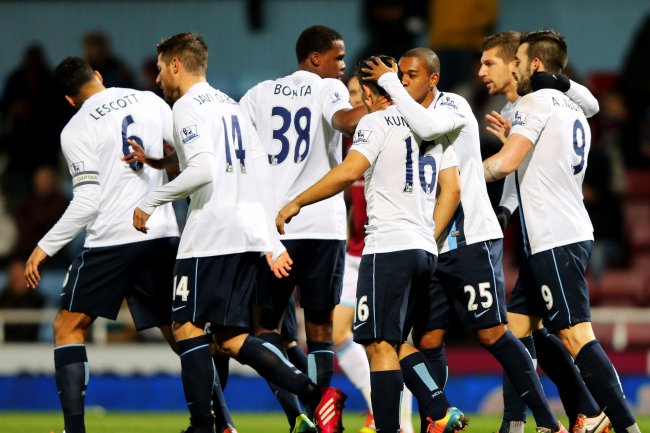 Manchester City face Watford in the FA Cup at the weekend before travelling to White Hart Lane to continue their Premier League campaign against Tottenham on the 29th.

West Ham, meanwhile, have eight days to plan for another testing evening, as they travel to Stamford Bridge to face Chelsea.

Is it going to be a City v United final…..POST YOUR comments?