Declaration Of War to retire

Declaration Of War to retire after Breeders Cup 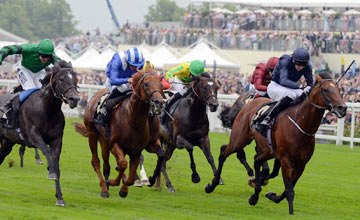 Aidan O’Brien has announced DECLARATION OF WAR will contest the $5 million Breeders’ Cup Classic on November 2 and then head into retirement.

Coolmore Stud announced that the dual Group 1-winning son of War Front is to start stallion duties next year at Coolmore’s headquarters in Fethard, County Tipperary, at a fee to be announced.

He will head to Santa Anita for a farewell in a race that has eluded trainer Aidan O’Brien on a number of occasions, not least in dramatic circumstances in 2000 when Giant’s Causeway missed out by a neck to Tiznow, and again in 2008 when Henrythenavigator beat all bar Raven’s Pass.

O’Brien said: “Declaration Of War has danced every dance this season and will have one more run in the Breeders’ Cup Classic. He has an unbelievable constitution and is a lot like Giant’s Causeway, a big, powerful, strong traveller, so we’re hopeful that he’ll run well.”

Bookmakers rate Declaration Of War a 10-1 shot for the Classic behind 7-2 favourite Game On Dude, who is unbeaten in six starts since losing out as 5-4 favourite in last season’s Classic.

The son of War Front was a disappointing favourite in the Lockinge Stakes on his seasonal reappearance in May but proved that form to be wrong when winning the Queen Anne Stakes at Royal Ascot.

Defeats in the Eclipse, Sussex and Jacques le Marois were to follow but he went on to add another Group One to his CV when defeating Trading Leather and Al Kazeem in the Juddmonte International Stakes at York in a time bettered only by Sea The Stars.

He began his career with Jean-Claude Rouget in France, winning both races as a two-year-old.

“Unbeaten as a two-year-old in France, Declaration Of War won two of Britain’s highest-profile Group 1 races this summer and is a very imposing horse to look at,” said Coolmore manager Christy Grassick.

“His sire War Front is probably the most sought after stallion in America at the moment and his dam is a half-sister to star two-year-old and American Classic winner Union Rags. He’s a hugely exciting prospect.”