Duffer in the Puffer

Sam Allardyce, the ‘Duffer in the Puffer’…….

After the ‘Wally with the Brolly’….Big Sam proved to be the ‘Duffer in the Puffer’ after slumping to another ‘hammering’….surely his time is up?

Have your debate in our forum, as West Ham United’s fans turned their fury on manager Sam Allardyce as they suffered a second cup humiliation in a week – this time at Manchester City’s hands.

Allardyce was given the public support of co-owners David Gold and David Sullivan after the embarrassment of a 5-0 FA Cup third-round defeat at Championship side Nottingham Forest on Sunday.

But their travelling supporters delivered a different verdict after Manchester City went one better in the Capital One Cup semi-final first leg.

“I don’t think being out-classed is the problem tonight. For me, it was the sheer lack of effort. After they were battered by Forest, you would expect West Ham’s senior players to put a shift in and show the younger players how difficult it is to get in to the first team. But they didn’t show anything…….Danny Mills”

Alvaro Negredo scored a hat-trick as City made it 59 goals in 15 home games this season, while rain-soaked West Ham supporters chanted venomously against Allardyce after showing commendable patience in the face of this latest fiasco.

City were, as usual on their own ground, irresistible in attack but West Ham’s lack of resistance or passion was nothing short of pathetic.

It was eventually all too much for the Hammers’ fans, whose views will have been heard loud and clear by Sullivan as he sat looking thoroughly miserable in the directors’ box.

Negredo’s treble was the centrepiece of another dazzling attacking display by City, who have effectively secured a place at Wembley by making the second leg at Upton Park a formality.

West Ham may be short on numbers but there can be no excuses for a performance that fell short in every respect. It was a betrayal of the fans who travelled to the Etihad Stadium expecting much more than they saw at the City Ground on Sunday.

And it was a sobering night for Allardyce as he was booed by West Ham’s fans, who look to have lost faith in their manager after this latest heavy beating.

The Hammers made eight changes from the Forest debacle, giving an instant debut to defensive loan signing Roger Johnson – but it was the same old miserable story.

City started the rout with a goal of simplicity and brilliance. Toure’s long pass dropped perfectly over Negredo’s shoulder and the Spanish striker demonstrated supreme technique to take it on the volley with his left foot and beat goalkeeeper Adrian.

West Ham were negligent in all areas. City possessed the superior talent but were aided by a lack of anything resembling a competitive edge from their hapless opponents. 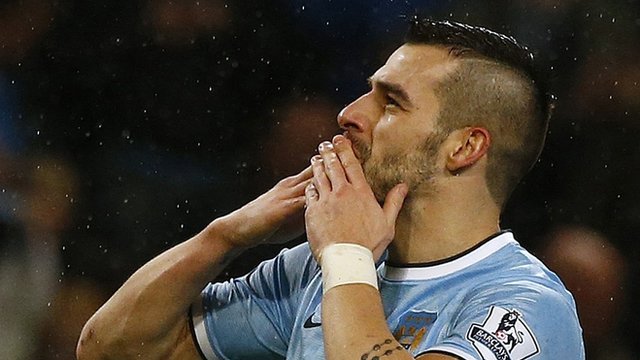 Allardyce’s defence had no answer to City’s attacking variety and the second goal was only a matter of time. Negredo was the scorer again, the recipient of Dzeko’s fine pass before sending an angled finish past Adrian.

Toure had required lengthy treatment, and a spell off the pitch, after injuring his ankle – but he recovered well enough to expose more dreadful defending and effectively seal this semi-final before half-time.

He advanced through the centre of the pitch, with Johnson retreating alarmingly until it was too late, before rolling a shot past a badly-exposed keeper.

Any suggestion City might consolidate was dismissed within four minutes of the restart when Negredo completed his hat-trick with another moment of real quality, sweeping a precise shot past Adrian after David Silva’s shot had been half-blocked.

The scale of West Ham’s ineptitude can be measured by the fact that City were not even required to go anywhere near top gear to demolish them.

Manchester City have won 14 of their 15 home games this season, with their only defeat coming in the Champions League against Bayern Munich. They have scored 59 goals at the Etihad and conceded just 13.

Dzeko had worked hard in support of Negredo and was rewarded with a goal of his own on the hour, turning in Silva’s cross at the near post.

It was the signal for the start of loud anti-Allardyce chanting from West Ham’s fans, who had supported their team until that point.

The only West Ham player to emerge with a semblance of credit was Adrian, who made some fine saves to keep the score down.

He was powerless, however, to anything about the final flourish from City as Dzeko thrashed home a thunderous finish from Aleksandar Kolarov’s cross.

“It was a brilliant performance, the way we played the 90 minutes. In football, it is never finished. Tonight was an important step but if we were able to score six goals, it was because of the way the team played.

“Alvaro Negredo had a good match not only because he scored two goals but also because he was the link with the midfield. It was the same thing for Edin Dzeko.

“They were not playing very well together before because they were not used to it – but the more matches they play, the better they are.”

View all CAPITAL ONE CUP betting