Today we give our first Epsom Derby preview two week ahead of the seasons blue riband event. It remains a truly national sporting event as 125,000 will descend on the Downs on the day of the race.

The three-year-old blue riband championship race is run over a mile and a half of Epsom’s unique twists and turns on Saturday 7th June and to date we have a strong favourite that has emerged in the shape of AUSTRALIA…….at cramped odds of 4/6 on we believe he’s a false favourite and better value will be found elsewhere.

Let’s start with odds on shot, Australia. A winner of two of his four starts to date, and a staying on third in the 2000 Guineas at Newmarket on his only run this term.

So is Australia the real deal for Derby glory…..by Derby winner Galileo out of Oaks winner Ouijia Board stamina should pose no problem with Cape Cross and Sea The Stars in his bloodline.

He’s shown plenty of early speed in his four starts, including the 2000 Guineas. There’s also speed within his breeding at the mile trip, which also questions the step up to, so without a run over further than a mile in any of his four starts, he could well be found out.

His debut at the Curragh last year, saw him beaten by Renaissance Art but beat Carla Bianca next time at the same venue. That rival has, however, failed to win in three subsequent starts.

On his last 2-y-o start he won a messy four-runner Group Three race at Leopardstown, but followed that running well in the 2000 Guineas and The Great Gatsby subsequently won the Dante at York.

Aidan O’Brien has described Australia as the best Derby candidate he’s ever trained, which is high praise indeed, however Ballydoyle’s runners have been slow to hit their stride this year.

It wasn’t a good start to the season with a bout of coughing hitting the yard prior to the Irish flat season has hinderered the progress of  he O’Brien runners.

There is no other track quite like Epsom and is usually won by the horse best equipped to handle the unique demands of the track, from its’ unique cambers and undulations to the noise from the huge crowd and the sweeping turn into the straight that is Tattenham Corner.

Many a short priced favourite can be undone around here, so whilst the signs point to Australia with doubts over his stamina and  still ‘only’ a Group Three winner we don’t see the value in backing him and we’d rather back one each way?

Geoffrey Chaucer is an improving sort and he’s a viable place possible, though his price is short enough now at a best priced 7/1 with Skybet.

The Derrinstown Stud Derby Trial looked the deepest field in terms of quality, and if improvement  comes from that run, then Dermot Weld’s Fascinating Rock with the prospect of slightly better ground and handling Epsom’s contours has a fine chance of making the frame at least and a best 14/1 with Betfred.

Ebanoran for his part seemed to nick that race – from a first past the post perspective, at least  looking all out by the line. That was his second start this term, so he may not have as much progression as some to Derby day and is a best priced 16/1 with BetVictor.

Kingston Hill  trained by Roger Varian, was an impressive winner of the Racing Post Trophy last autumn, but was five lengths behind Night Of Thunder in the 2000 Guineas. The ground was good to firm that day, and it was soft at Doncaster for his Group 1 win, and therein may lie the key. If it’s soft on the day and some of the others fail to stay he may be a good EW shot at EW 16/1 with BetButler.

Western Hymn looked a world beater on his seasonal reappearance, surging clear of a field headed by Snow Sky. He was then a convincing winner of the Lingfield Derby Trial, effectively eliminating anything beaten that day as not good enough. Since then, Western Hymn was less than impressive when winning the Sandown Classic Trial.  This race hasn’t been a yardstick and whilst unbeaten is not one for us and a best 14/1 with bet365.

True Story (our notebook runner) was brilliant in the Feilden Stakes at Newmarket, over nine furlongs. A hot shot in the Dante at York, he was never travelling at any point in the race and Fallon did well to finish as close as he did, a one and a half length third. The going was offered as an excuse, plus coming too quick after the Fielden – currently 16/1 with BetVictor.

Orchestra was last seen winning the Chester Vase, the race taken by Ruler Of The World en route to Derby glory last year. Orchestra ran green as grass that day and has bags of scope to be better than the bare form of that run. He’s a great a place chance, and he has an almost perfect stats fit. If he could step up again on what he’s done so far and with Ryan Moore likely to be onboard he looked a great EW shout at 20/1 with Betfair. 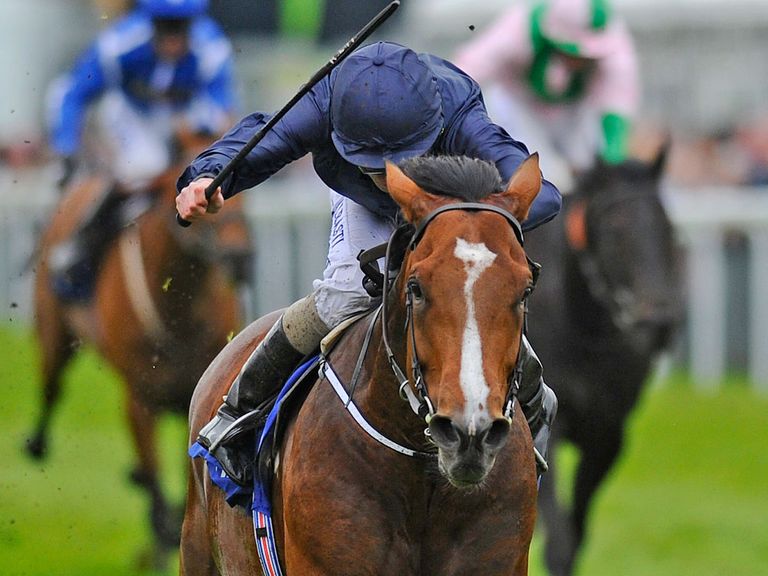 Orchestra is our best EW shout

2013: Ruler Of The World – ridden by Ryan Moore, trained by Aidan O’Brien

If you’re looking for an alternative account to bet365, then MOBIBET look to be offering the best value for FREE matched bets with up to £150/Euros 200 – check them out at

To get full access to the forward declarations just sign up to the FREE weekly newsletter from any of our pages and we’ll post out the advanced weeks selections!!!!

It’s still a growing MONSTER payout…..and the biggest ever Scoop6 win dividend is up for grabs with the win fund already exceeding £12 million as the bet has rolled over for the twelfth consecutive week!!!

The Scoop6 rolled over again last weekend but two small staking punters got closer to claiming the £6.8 Million win fund than anyone else has in recent weeks.

Going into the final 6th leg there were just 3 horses covered by winning tickets. One punter from Ireland, who placed a single £2 bet, had a ticket on Capaill Liath while both Escape To Glory and Justonefortheroad were running for Joe McGuire from Thatcham, Berks who had placed four £2 Scoop6 bets.

Escape To Glory appeared to have the best chance, setting off at 10-1 and even being matched at 1.01 in running, but Llanarmon Lad came home first to win by 11/4 lengths and so causing the Scoop6 to not be won again. Capaill Liath came in third whist Justonefortheroad finished 6th.

Joe told the Mirror “I picked the horses because I fancied them. A few had good form so I just went with my gut. I’m absolutely gutted, but that’s life. It’s still amazing to have five winners but I’m sad, it’s the closest I’ve ever come to a big win.”

Like we said last week, if we can get enough interest from these pages we’ll look at a syndicate entry next week?

If we can get 150 interested parties paying £10/week we could have a real good thrash at it?

Get on the Scoop 6 with Betfred who are also offering all new mobile customers a free £10 Sports bet. Once players have used their free £10 bet, they will also be entitled to a £25 Matched Bet.

Sign up to the FREE weekly newsletter from any of our pages and we’ll judge the level of interest or just post through our FACEBOOK LINKS or tweet to us @BackWinners to give a view on this plus a weekly round up of offers, antepost views and competitions etc [mc4wp_form]

Check out our dedicated page of this seasons ‘Notebook Performers’