Wigan pulled off the shock of the season in the FA Cup, knocking out Manchester City with a stunning 2-1 quarter-final victory on Sunday at the Etihad Stadium to book a spot in the semi-finals.

Jordi Gomez gave Wigan the lead with a 27th-minute penalty after Martin Demichelis fouled Marc-Antoine Fortune in the box. James Perch doubled Wigan’s lead early in the second half before Samir Nasri pulled a goal back for City in the 68th minute. The Latics then held off wave after wave of Man City attacks in the closing moments.

Sunday’s quarter-final was a rematch of last season’s final, which Wigan won 1-0 at Wembley shortly before being relegated to the Championship. The Latics, who are managed by former Manchester City striker Uwe Rosler, will now face Arsenal at the same venue in the semi-finals.

“Last season was an unbelievable achievement to put Wigan on the football map, but to follow that up this year, to be in the semi-final, is equally strong from my players,” Rosler said, per MCFC.co.uk.

Rosler added: “I’m delighted with not just the win, but the way we won.”

Nigel Clough’s side became the first third-tier side to reach the last four since Wycombe Wanderers in 2001.

After Callum Harriott had missed from seven yards for Championship side Charlton, midfielder Flynn stretched to poke in Jose Baxter’s bouncing cross.

The victory was United’s ninth in a row in all competitions, and means a first FA Cup semi-final since 2003 for the Blades.

Clough’s team have become the big story of this season’s competition, having already knocked out two Premier League sides – Aston Villa and Fulham – plus Championship side Nottingham Forest on their run to the quarter-finals.

In front of a sell-out crowd at Bramall Lane, there were few chances during a first half in which the tension appeared to get to both sets of players.

Charlton striker Marcus Tudgay’s deflected shot, turned aside by home keeper Mark Howard after half an hour, was the first effort on goal of any note.

At the other end, United’s on-loan Liverpool midfielder Conor Coady had a goal ruled out for offside, and defender Bob Harris drove a shot just over, having been set up by Harry Maguire.

Centre-back Maguire’s shot on the turn hit the side netting early in the second half, before Harriott passed up a great chance to fire Charlton towards their first FA Cup semi-final since they last won the trophy in 1947.

Tudgay cut the ball back from the by-line, but Harriott turned his shot wide on the stretch from seven yards.

The Blades then took advantage of that miss to score twice in quick succession, with Flynn turning in the opening goal from six yards with the sole of his boot after Baxter’s cross from the left unstitched the Charlton defence.

Almost straight away, the lead was doubled as full-back Brayford’s low shot from outside the penalty area was deflected past keeper Ben Hamer.

Coady thought he had added a third from close range as the ball rebounded to him off a post, but was again ruled offside.

Blades keeper Howard turned away a late shot from Charlton’s Iran international substitute Reza Ghoochannejhad late on, but the visitors failed to mount a comeback.

“We were nervous in the first 20 minutes and it was important to get in 0-0 at half-time.

“The atmosphere, it saps you when you’re not used to it and a lot of players playing in this sort of thing for the first time, this atmosphere takes your energy and it takes your breath away at times.

“To get to this stage as a League One club in the semi-final is an incredible achievement.”

City reached the semi-finals of the FA Cup for the first time since 1930 as three goals in the final 22 minutes ended Sunderland’s hopes.

Curtis Davies headed in before former Sunderland player David Meyler robbed Lee Cattermole to run clear and finish. Cattermole was at fault for the third, when his loose pass allowed Matty Fryatt to score from 12 yards.

Sone Aluko missed a first-half penalty for Hull, but their late flourish set up a semi-final with Sheffield United.

Meyler’s goal was the crucial one, the Republic of Ireland midfielder celebrating by headbutting the corner flag after being on the receiving end of similar treatment from Newcastle boss Alan Pardew last weekend.

And after winning promotion back to the Premier League last season, Meyler and his team-mates are now only two games away from winning their first major trophy.

Sunderland, beaten by Manchester City in the Capital One Cup final last week, will now focus on surviving in the top flight, in which they sit 19th, one point from safety.

Hull were the only side left in the competition never to have won the trophy and, after a scrappy first half, ruthlessly took their chances to beat the Black Cats for the third time this season. 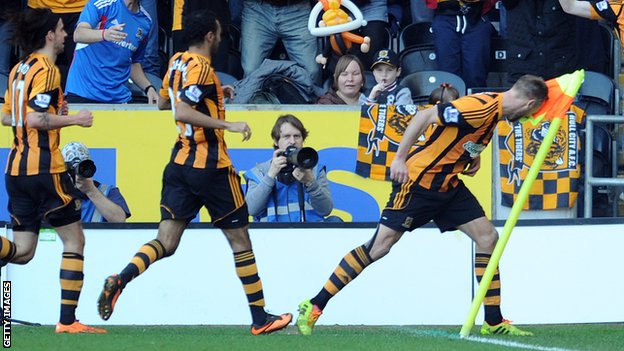 Sunderland will have played 49 matches by the end of the campaign and would have not enjoyed the prospect of a replay, which the match looked destined for after Aluko spurned his spot-kick.

The striker, who has scored just once in 14 appearances this season, was swept off his feet by Sebastian Larsson to earn the penalty but his tame effort allowed Oscar Ustari to dive to his right to save.

Fryatt had earlier flashed a glancing header wide of the Argentine’s post, while Sunderland – FA Cup winners in 1937 and 1973 – struggled to create a clear opening.

And Gus Poyet’s side, with six changes from last week’s Wembley defeat, were undone when defender Davies headed home Tom Huddlestone’s free-kick for his third goal in as many matches.

Four minutes later Meyler doubled the lead as he led a solo counter-attack, to the delight of former Sunderland manager Steve Bruce.

Hull, who are only five points clear of the Premier League’s relegation zone, sealed the win when Cattermole’s error presented Fryatt with time and space to slide home.

Victory means Bruce will manage a team in an FA Cup semi-final for the first time, with another of his former clubs providing the opposition on the weekend of April 12-13.

Hull boss Steve Bruce on David Meyler’s ‘headbutt’ celebration: “In the way he has conducted and handled himself this week, David has been a model for me.

“David took it on the chin and accepted the apology. He didn’t roll on the floor and he didn’t go and bleat in the newspapers.

“I’ve said all along that it’s sad that the FA Cup has lost a bit of the magic for whatever reason, but when you reach this stage it becomes exciting.”

Were YOU at the games……………POST YOUR comments?

We are running a big promotion for new and existing customers with BETFAIR. The offer is a Betfair No Lose ACCA…. any fixtures with your stake refunded as a free bet up to £10.

Have a great weekend.