They chased down India’s target of 304 with three balls and four wickets to spare to record their highest successful chase on Indian soil.

The series has now produced two thrilling chases in a row, after India mounted the second-greatest chase of all time on Wednesday to draw level at 1-1.

This time it was Australia who were equal to the challenge, led by James Faulkner’s 64 off just 29 balls. 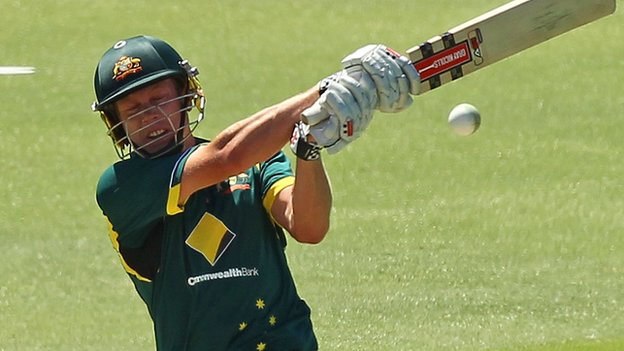 The Tasmanian all-rounder hit 30 runs from the 48th over, smashing Ishant Sharma for four enormous sixes. And he clubbed the sixth six of his innings to take Australia across the line when they had required nine from the final over.

Earlier, India had set a formidable total after MS Dhoni scored an unbeaten 139. He was dropped by George Bailey in the penultimate over, and made the tourists pay when he added 34 more runs from his final 11 deliveries faced.

Bailey made amends by scoring 43 in Australia’s reply, while Adam Voges hit 76 not out.

Mitchell Johnson took two wickets in consecutive balls to leave India in trouble at one stage, and finished with 4-46. Dhoni launched the recovery, adding 76 with Ravi Ashwin (28) and 72 with Virat Kohli (68).

Australia started their reply well, Aaron Finch and Phil Hughes giving them their third consecutive opening stand of more than 50. They slumped to 3-88 before Bailey and Voges combined for 83, the biggest partnership of the match.

Australia are 7/4 to win the Ashes series, with England priced at 1/1. James Faulkner is 100/1 to be Australia’s top run-scorer in the series.