It’s Inter Milan v Napoli this evening and we hopefully will carry on our successful foray into the European leagues for betting opportunities……..

Napoli are all but confirmed in third while Inter are pushing Fiorentina hard for fourth and are looking for a third consecutive win.

With Napoli’s position in the league so secure they may be tempted to rest a few players here ahead of the Italian Cup final next Friday.

They do have an excellent recent record against Inter having won four of their five meetings since 2011/12, although they did lose here last season and have lost half their six trips this term to the current top eight.

Inter have lost only two home games all season but too many draws have cost them valuable points. They’ve shown a greater cutting edge in recent weeks however.

Hernanes has settled in after his January move, and they’ve won six of their last 11 home games against top-six teams. 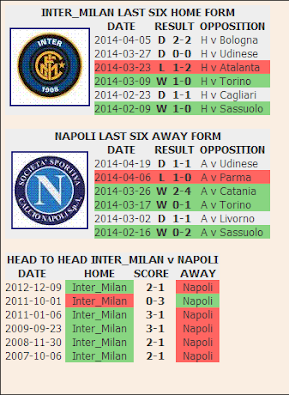 Inter have not managed to keep a clean sheet in any of their 14 home games against top-six teams since 2011/12 but their current defensive record is much better than its been in recent years.

Nine of their last 12 home games have actually had fewer than three goals and Napoli also have a decent defensive record, but given there tends to be an increase in goals at this time of the season we’ll avoid the goals markets.

With Inter having lost just one of their last 12 matches home or away and with the greater motivation here they look worth backing at 1.91 on the Asian Handicap -0.25.