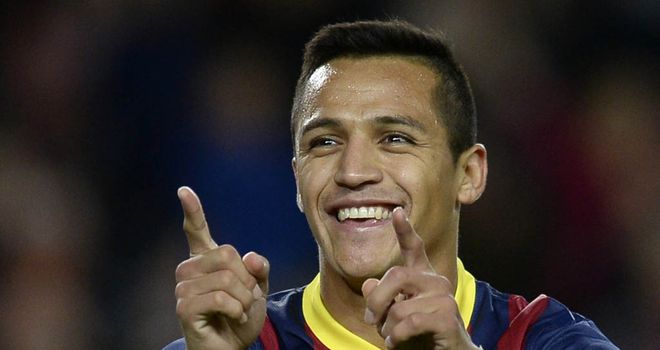 Barcelona recorded a subdued 1-0 victory over Espanyol at the Nou Camp, where Alexis Sanchez grabbed the winner.

Gerardo Martino ensured he completed his first 100 days as Barcelona coach without defeat. Barca had to wait until the 68th minute to break down their city rivals when Sanchez was left with a simple tap-in after clever work from Neymar.

It was a rare incisive moment from Barca but enough to ensure they opened a four-point gap at the top of the Primera Division ahead of this weekend’s fixtures. Martino, who began his reign with eight successive league wins, saw his side dominate possession in the first half, but Espanyol effectively got bodies into the box to frustrate their advances.

Alexis drew an early save out of Kiko Casilla with a tame side-footed shot, but the away goalkeeper was untested again until just before the break. Barca repeatedly ran into dead ends, Hector Moreno stopped Neymar in his tracks after the Brazilian glided past two defenders, while referee Velasco Carballo’s leniency allowed Espanyol to fracture the rhythm of the game.

Moreno and Victor Sanchez were both lucky to avoid a caution, the latter after hacking down an off-colour Lionel Messi. The Argentinian floated the resultant free-kick well over. Espanyol almost stole the lead against the run of play when Dani Alves over-ran the ball to allow Sanchez to slide in. The on-rushing Victor Valdes saw the danger just in time and spread himself to concede a corner.

With a minute to go before the break Barca finally found some penetration with Iniesta forcing Casilla to punch clear and moments later Alves hit the post after a one-two with Sergio Busquets at the top of the area. After the break Messi almost scored a rare header, getting on the end of an Alves cross, but Casilla made good ground diving to his right.

Neymar curled a shot just wide of the far post but it was a shot made of his own doing as the Barca’s usual tiki-taka incisiveness was missing. Finally, they did make the breakthrough on 68 minutes and it was Neymar who created the goal.

The forward tricked his way into the area before rolling a pass, which fortuitously rolled between the legs of two players, to present Alexis with the simplest tap-in at the back post. It was the Chilean’s seventh goal of the season.

Barca hardly finished the match in comfort, with Sergio Garcia blasting over from a tight angle, but the visitors did not have the required threat to find an equaliser.