Liverpool v Everton tonight at Anfield and a great offer for reds fans to get a massive 4/1 on their side….please read on…

Liverpool duo Joe Allen and Mamadou Sakho are both doubtful as they continue to nurse hamstring injuries.

New striker Lacina Traore may be risked despite a recent hamstring injury, but Bryan Oviedo (broken leg) is out.

Brendan Rodgers’s belief that Liverpool should still be considered as title contenders despite being six points behind third place is not entirely far-fetched. 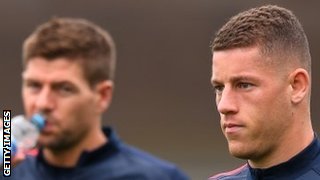 Ross Barkley is a local lad, so he understands what this game means – but he is also fearless, which he showed with his brilliant performance in that 3-3 draw in November.

If he is fit, he will play in the space between Liverpool’s defence and midfield and it will be a great to see Steven Gerrard try to stop him. If Barkley is not playing, then the Liverpool captain’s life will be a lot easier.

Rodgers would probably agree that Liverpool will need to take maximum points from those five crucial home games to exert any real pressure on the breakaway top three, starting with this mouth-watering derby.

Liverpool should be confident against anyone at Anfield, where they’ve lost just one of their last 20, but the sloppy home draw with Villa last time out will need to be a one-off.

If the Reds still consider themselves to be in the title race, what about Everton? Just a point worse off than Rodgers’s side, Everton’s campaign has perhaps been the better story, however impressive Liverpool have been.

The manner in which Roberto Martinez has changed Everton’s approach, without losing any of the sheer bloody-mindedness that was a feature of the team under David Moyes, must already have made him a contender for manager of the season.

If Everton were to finish in the top four or win the FA Cup, then Martinez would have a very strong case indeed.

Like Liverpool, the Toffees play some lovely stuff going forward, but defensively they’re better than their neighbours.

Since the first Merseyside mash-up of the season, the thunderous 3-3 draw at Goodison in November, Liverpool have conceded 15 goals in 10 Premier League games to Everton’s seven.