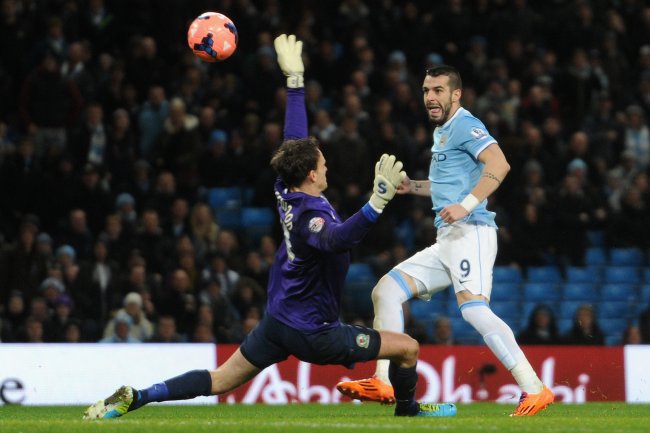 Alvaro Negredo and Edin Dzeko scored two goals each, and Sergio Aguero marked his return from injury with a goal in a substitute’s cameo. Jesus Navas registered two assists, while Dzeko added one assist to his two-goal haul. City will now host Watford in the fourth round.

The teams drew 1-1 in the original third-round fixture on Jan. 4 at Blackburn’s Ewood Park. For the visitors, securing a result was always going to be difficult at the Etihad, where City have maintained a 100 percent record in the Premier League this season.

The goals were Negredo’s 20th and 21st of the season, making him City’s top scorer ahead of Aguero. Aguero, who missed eight games due to a calf injury, returned to the squad as a second-half substitute, replacing Negredo.

“I’m really very happy but I think the difference between the teams wasn’t five goals,” Manchester City manager Manuel Pellegrini said, per MCFC.co.uk. “(Blackburn) were a very strong team and we didn’t find space in the first-half.

Pellegrini added: “Yes, we had lots of chances in the second half but congratulations to Blackburn. They played a very good game tonight.”

Pellegrini rotated his squad heavily, making eight changes to the side that won 2-0 at Newcastle United in the Premier League on Sunday. Only midfielder Fernandinho and strikers Negredo and Dzeko remained in the side, while an entirely new four-man defence of Gael Clichy, Matija Nastasic, Joleon Lescott and Micah Richards were among the changes.

Even with so much squad rotation, City carved out a chance quickly as James Milner crossed from the left for Dzeko in the second minute. Dzeko had a free header in the middle of the box, but he directed his effort over the bar. Dzeko missed again in the 10th minute, lofting a shot over the bar after being teed up by Alvaro Negredo just outside the box. 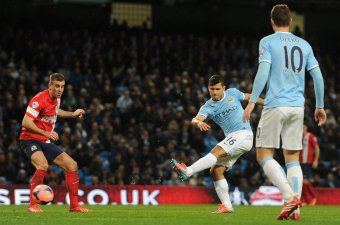 Blackburn, currently eighth in the League Championship, created dangerous moments of their own. Ben Marshall shot wide of the target from a corner in the 17th minute and curled a free kick straight at Costel Pantilimon six minutes later.

On the other end, City’s Javi Garcia forced a save from Paul Robinson with a shot from distance in the 26th minute, and Dzeko shot off target again a minute later.

City’s best chance yet came in the 36th minute. Jesus Navas sped down the right flank and played a dangerous ball across the face of goal, where first Negredo and then Fernandinho came within inches of applying the final touch. Instead, the ball rolled away to safety and Blackburn survived.

The hosts continued defending in numbers throughout the half but were almost let down by a moment of miscommunication just before half-time.

There appeared to be little danger when Milner floated a lazy cross into Blackburn’s box in the 44th minute, but Robinson hesitated and allowed the ball to drop in front of him. Richards threw himself at the ball as it bounced toward the far post but was unable to nod the ball into the net.

This time, though, it was only a brief let-off for Blackburn. After 45 minutes of defending, the visitors were undone in stoppage time.

With mere seconds remaining in the half, Fernandinho crossed from the right for Negredo, who powered a low header into the net for a 1-0 half-time lead.

It was 2-0 within two minutes of the restart, and Negredo was the scorer again.

In the 48th minute, substitute Aleksandar Kolarov played a long ball from the left side near the halfway line, finding Negredo in the box behind Blackburn’s central defenders. With his first touch, Negredo lifted the ball over Simon Eastmond, who had replaced Robinson in Blackburn’s goal at half-time.

City were fully in control, and Blackburn’s subsequent approach seemed to suggest the match was finished as a contest. Josh King replaced D.J. Campbell in the 59th minute, leaving the visitors without a recognised striker on the pitch.

But City still had work to do. King made an instant impact with a pair of chances in quick succession, heading over the bar before forcing a near post save from Pantilimon in the 64th minute.

Blackburn had carried the action since City’s second goal, but instead of finding a way back into the match, the visitors soon found themselves behind 3-0.

Navas pulled down a long ball on the right side and cut toward the byline before pulling back for Dzeko in the middle. With his first touch, Dzeko hooked his shot above Eastmond and into the net off the underside of the crossbar.

Aguero entered the match as a substitute for Negredo in the 72nd minute, and within moments he was on the scoresheet.

Clichy started the move with a cross from the left in the 73rd minute. Dzeko collected the pass in the box, turned and laid off for Aguero, who swiveled to set up his left foot and finished at the far post for a 4-0 lead.

Ronaldo is currently priced 12/1 in the ‘2014 World Cup – Leading Goalscorer’ market and Portugal are quoted 33/1 in the tournament outright winner betting.