David Moyes has had his obvious doubters following his indifferent start to his career at Manchester United.

A string of poor performances from United have led to people questioning Moyes’ tactical nouse. Performances against Chelsea, Liverpool and Shakhtar Donetsk have left  United fans frustrated, while recent results against West Brom and Southampton have proved Old Trafford is no longer the fortess it once was.

Although Manchester United have had an extremely difficult fixture list for the start of the season, facing Liverpool away and Chelsea and Manchester City at home, they need to improve their form if they are to challenge for the title. 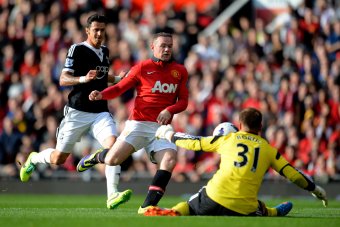 Whilst recent performances against Fulham and Norwich are cause for optimism at Old Trafford, a test against in-form Arsenal will truly confirm whether the recent results have been a mere blip or if Moyes has indeed found his feet in Manchester.

That unbeaten run of eight games, including five wins, has seen the pressure on Moyes lift considerably. Following Sir Alex Ferguson is an unenviable task, and a dropoff is expected.

Amid wild expectations that Manchester United would actually drop out of the top four, their new manager can go about proving the doubters wrong.

However, if Manchester United are to defend their Premier League crown, they surely have to beat the League Leaders in order to re-establish Old Trafford as a fortress.

Meanwhile, Arsenal have had a fantastic start to the season, gaining 25 points out of 30 and sit five points above second placed Chelsea. The signing of Mesut Ozil, along with the sensational form of Aaron Ramsey, has invigorated Arsenal.

However, unlike United, Arsenal have had a relatively easy fixture list until now, and as they have not yet faced ‘the Big Three’ (Chelsea, Manchester City and Manchester United), many still do not consider them as title contenders.

Although they were emphatic against an in-form Liverpool side last week, and extremely impressive in Europe last night, they can not be considered as title contenders yet, and so will have a point to prove against United on Sunday.

Arsene Wenger is hoping his Arsenal players can put down a Premier League statement by beating old rivals Manchester United on Sunday.

The north Londoners make the trip to Old Trafford in bullish mood off the back of a gritty and determined 1-0 win against Borussia Dortmund at Westfalenstadion in the Champions League on Wednesday.

The Gunners have not won at the home of the defending champions in all competitions since September 2006 but Wenger said he was confident his players could inflict a fourth – and potentially fatal – domestic defeat on David Moyes’s men.

“I just hope that it strengthens the belief of my team that we can put another great performance in,” Wenger said.

“You know we have another massive game on Sunday, and we want that kind of performance again.”

Arsenal are now unbeaten in 15 away matches in all competitions and are five points clear of Chelsea in second at the top of the Premier League.

They have two more games to book their place in the Champions League knockout stages and Wenger warned there would be a high-profile casualty in Group F.

The Frenchman added: “Unfortunately this group is a very strong group, and one of the big teams will have to pay a heavy price. I hope it will not be us.”

Manchester United are languishing in eighth spot in the Premier League but are now unbeaten in eight games in all competitions and are priced at a general offer of 27/20 in the 90 minutes market (see massive offer details below on how to get 4/1!!!).

The draw is quoted 5/2 and the Arsenal away win is available to back at 11/5.

All-in-all, both sides will be desperate for a win on Sunday against one of their biggest rivals.

MASSIVE OFFER FROM BETFRED FOR THIS WEEKEND….PLEASE CHECK IT OUT…….

To take advantage of this offer YOU need to sign up with Betfred online or on mobile and place a bet on Man United to win in the outright match market.

As this offer is exclusively available to NEW players the price quoted onsite will not be 4/1, however, all NEW customers placing a bet on Man Utd to win will be paid out at odds of 4/1 within 24 hours should the bet come in.

Maximum stake per customer is £10, while the boosted odds of 4/1 will only apply to the first tenner of all stakes of over £10.

Check it out at  >>Massive Odds<< Manchester United v Arsenal