Wayne Rooney scores a brace as Man United fought back to beat Villa after a fly-by protest by fans calling for manager David Moyes to be sacked.

A plane carrying an anti-Moyes banner was booed by some home fans as it flew over Old Trafford in the second minute.

Mata slotted home a third before Javier Hernandez made it 4-1 in injury time.

The aerial message organised by disgruntled United fans read “Wrong One – Moyes Out”, but it was not well received by supporters inside the ground when it appeared overhead.

Just as significant was the reaction to Moyes emerging from the tunnel ahead of kick-off – before his players, unusually – with applause from all four sides of Old Trafford greeting his arrival.

That backing could easily have wavered when Westwood expertly bent a free-kick over the United wall and beyond a diving David De Gea in the 13th minute.

But the United fans continued to sing Moyes’s name and saw their side level seven minutes later when Rooney expertly steered Shinji Kagawa’s cross into the corner of the net.

The home side improved as the game went on, and took the lead just before half-time when Kagawa’s pass, intended for Rooney, ran through to Mata inside the box. He turned inside Bacuna but was sent tumbling as the Villa defender dived in, and Rooney made no mistake from the spot.

Villa had their chances, with Benteke mis-kicking in front of goal from Westwood’s cross and then heading over from a Marc Albrighton delivery.

Those misses were punished just before the hour when Marouane Fellaini helped the ball into Mata’s path inside the box and the Spanish playmaker fired home his first goal since joining United for £37m in January.

Wayne Rooney’s goals against Aston Villa were his first at Old Trafford since he found the net in a 3-2 win over Stoke on 26 October, ending a run of 11 home games in all competitions without scoring.

Rooney’s brace also moves him up to fourth place in the all-time Premier League goalscorers list, with 171, behind Alan Shearer (260), Andy Cole (187) and Thierry Henry (175).

By now the hosts were finding plenty of space in and around the Villa area, but there were still some gaps in their defence too.

Benteke should have done better when he beat the offside trap to meet Ciaran Clark’s ball into the box, but he failed to make a proper connection.

Bayern Munich, who visit Old Trafford in the first leg of their Champions League quarter-final on Tuesday, are unlikely to be so wasteful, but this time United’s defensive lapses never threatened to spoil their victory.

Hernandez converted Adnan Januzaj’s inviting cross to make it 4-1 in stoppage time and, at the final whistle, Moyes left the arena in the same way he had arrived – to loud applause.

“I said to him in the dressing room after the game that he is doing a great job for the team. He is getting the goals that we need and his all-round form and play have been very good too.”

Aston Villa boss Paul Lambert: “I thought 4-1 was harsh on us. We started the game great and scored a really good goal and we were looking pretty good. 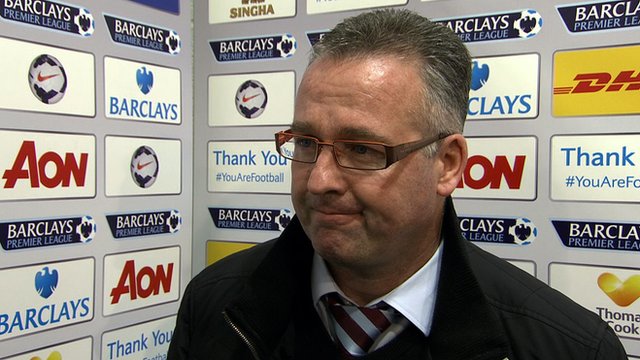 “But then we conceded a pretty poor first goal and it was a clear penalty to United, no arguments about that.

“Just after the restart we had two incredible chances to peg it back and you have got to take chances like that.

“That is no criticism of Christian Benteke because he has scored vital goals for us and he will continue to do so but, on another day, we score a couple of goals and it becomes a different game.”

Were YOU at the game……………POST YOUR comments?

Get a FREE NO LOSE BET on this weekends matches…..

We are running a big promotion for new and existing customers with BETFAIR. The offer is a Betfair No Lose Bet….

Have a great weekend!!!