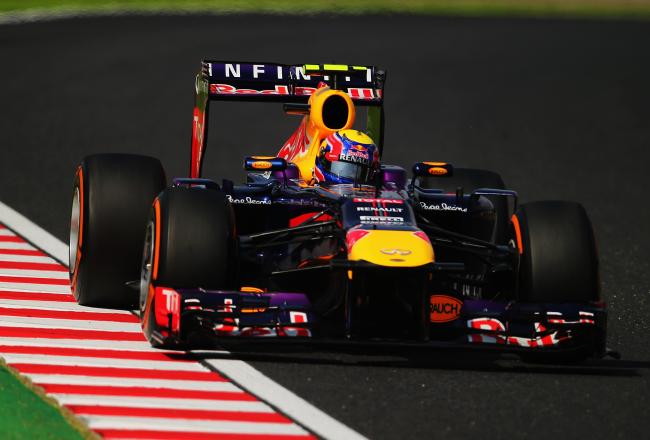 Mark Webber claimed his first pole position of the season – and his first since Korea last year – with a superb performance in qualifying in Japan on Saturday afternoon.

The Australian got the better of Red Bull team mate Sebastian Vettel, who suffered from intermittent KERS issues in Q3.

Webber had set the pace in Q1 at Suzuka with 1m 32.271s as he took the honours away from Mercedes’ Lewis Hamilton, who in turn had displaced Ferrari’s Fernando Alonso. But with only a few minutes remaining the session was temporarily red-flagged when Jean-Eric Vergne’s Toro Rosso rolled to a smoky halt at the Degner Curve with its rear brakes on fire.

After the STR8 had been liberally doused in fire extinguishant the session resumed briefly, giving those who wanted another run just enough time to complete one more timed lap. There was another fire, this time when Esteban Gutierrez got back to his pit and the rear end of his Sauber was briefly set ablaze.

Several runners, notably Lotus’s Romain Grosjean and Ferrari’s Felipe Massa, opted for the medium compound Pirellis and as they jumped to the top of the times with 1m 31.824s and 1m 31.994s respectively, Adrian Sutil paid the price for his FP3 crash and was the first man who failed to get through, with 1m 32.890s.

Vergne was a sitting duck and dropped to 18th, while Max Chilton did a great job to outqualify the Caterhams. The Englishman lapped his Marussia in 1m 34.320s to Charles Pic’s 1m 34.556s and Giedo van der Garde’s 1m 34.879s. Jules Bianchi did a great job to bang in a lap of 1m 34.958s in his rebuilt Marussia, making the fight between the rival teams closer than it’s been all season.