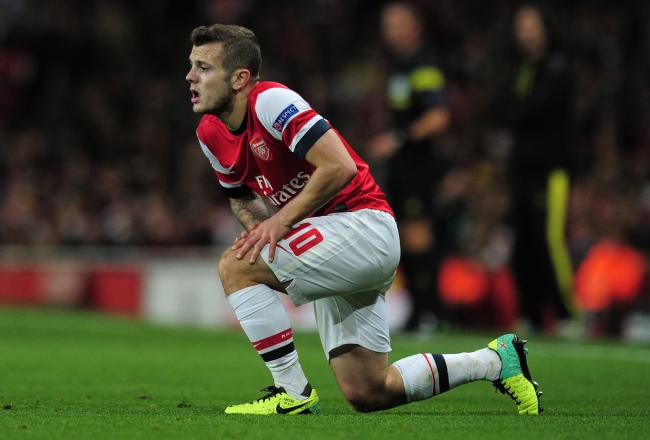 Jack Wilshere has been pronounced unfit to play in Arsenal’s Saturday evening fixture against fellow contenders for the Premier League top spot, Liverpool.

That’s according to Wayne Veysey of Goal.com, who claims it’s the midfielder’s ongoing ankle issues that pose a problem and he will be rested in an attempt to stop the woes worsening

The Gunners head into the weekend programme top of the table, with the Reds in third, just two points off the summit.

We want to be and I think we are title contenders, Liverpool as well.

And Wenger expects both clubs to maintain their position towards the top of the table as the season progresses, with the Frenchman expecting a titanic battle for the title.

Wenger told reporters: “We want to be and I think we are title contenders, Liverpool as well.

“You have four other teams certainly, or five, who will be title contenders this year.”

Second-placed Chelsea currently separate Arsenal and Liverpool, with Spurs in fourth, while Manchester City and Manchester United are down in seventh and eighth places respectively.

Arsenal are 9/2 to win the Premier League title this season, with Liverpool 15/2 and Chelsea 15/8.

There is mixed selection news for Wenger in midfield, with Mathieu Flamini ruled out of the Emirates Stadium showdown by a groin problem, while Mikel Arteta is available after serving a one-match ban.

But Wenger is confident that his squad are in the right mood to continue to prove their doubters wrong, adding: “The mood is very strong, very united and very focused.

“We are in a strong position in the Premier League, that is why our mood is positive.”

Liverpool are unbeaten in their last three visits to the Emirates, with last season’s meeting ending 2-2 after the hosts fought back from two goals down to earn a point.

Liverpool boss Brendan Rodgers has backed in-form striker Luis Suarez as the man to fire the Reds back into the Champions League.

Suarez has netted six goals in his last four games and will be a key dangerman when the Merseysiders take on table-topping Arsenal at the Emirates Stadium on Saturday.

He is a player..who deserves to be playing at the highest level of European football, but we believe he can do that at Liverpool.

And Rodgers believes that Suarez can fulfil his dream of playing in European football’s premier club competition without moving away from Anfield.

“He is a player, like some of our other players, who deserves to be playing at the highest level of European football, but we believe he can do that at Liverpool,” Rodgers said.

“Everyone talks about his goals and work-rate, but I’ve seen an improvement in his football ability and his maturity.

“That really bodes well for us. We won’t get carried away, we have to keep our concentration and continue to work hard.”

Suarez is again set to be partnered by Daniel Sturridge, who is currently the leading scorer in the Premier League, having netted eight times in nine league outings this term.

The England man has only failed to score against Southampton and Sturridge is 5/1 to open the scoring against the Gunners, with Suarez 9/2.

Uruguayan Suarez was on the scoresheet in the 2-2 draw between the two teams at the Emirates Stadium last season and can be backed at 6/5 to score at any time.