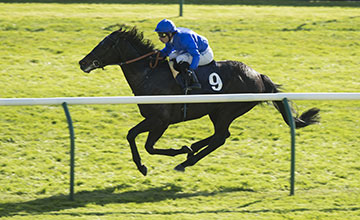 TRUE STORY makes an early statement of intent for The Derby

Racing News: 17th April 2014 has a couple of tentative selections for those wanting a gamble today. It’s a big Easter weekend of racing coming up and we’ll be looking to start our serious flat season selections next week as the form settles out.

We’ve just had one outing from one of our 12 flat horses to follow with Van Percy winning at the first time of asking. We have also had one of our ‘notebook performance’  horses going which gave us a 25/1 place with Lincoln winner Ocean Tempest last weekend.

Today’s racing news sees one of our ‘notebook performers’ go in the 17.40 at Newmarket this afternoon. RUDI FIVE ONE put up a good effort at Doncaster last time out after spending plenty of time idling at the rear of the field.

He’s up against a few hot pots here with Kempton winner Cloudscape still declared for the Derby, plus Volume who won a nursery very easily, named in the Oaks. Cloudscape’s trainer, John Gosden has had an amazing 15 winners from 30 runners so far….who’d back against him!!!!

If we’re backing our selections blindly over their next three runs, the RUDI FIVE ONE is available at a tempting best EW price 20/1 with Bet Victor and just 14’s and 16’s elsewhere!

15.40 Ripon…..Wall of Sound will be a short priced favourite after running consistently well last season. However, for value we look to MAVEN who has had the benefit of a run and is a 6 times distance winner……so should be able to make the frame at best EW price of 8/1 with BetFred

Another horse went into our notebook yesterday when Saeed Bin Suroor-trained TRUE STORY (pictured above) was the first to force bookmakers to take evasive action after yesterday’s win in the Fielden.

Settled towards the rear, the 5-2 shot travelled powerfully for De Sousa. True Story worked through the field on the bridle and powered clear from the furlong marker to put seven lengths between himself and favourite Obliterator, with a further six lengths back to Truth Or Dare in third.

As well as True Story travelled, Obliterator was the opposite, struggling to cope with the pace for most of the race before staying on through the field as others came under pressure.

With a furlong to go the two were already clear, but when De Sousa asked his mount to quicken the result was resounding.

Bin Suroor revealed True Story will have one more start before the Derby. “I wasn’t surprised how he won as he had been going well at home and the longer trip has suited him. We will look at the Dante or Lingfield for him now,” he said.

Betfred are offering all new mobile customers a free £10 Sports bet. Once players have used their free £10 bet, they will also be entitled to a £25 Matched Bet.

These are the nags we have highlighted for early season performance where they have looked to have had something in the tank at the end of the race or even ran well from what has been considered a poor draw…..no need to save them….bookmark our page and we will be backing them over their next three outings given conditions are right…

No selection from our TurfMeister in Ireland……

Get a £50 free matched bet with SeannieMac