The 200th and final Test in the stunning career of Indian cricket legend Sachin Tendulkar is under way in his home city of Mumbai.

The 40-year-old record run-scorer in Tests and one-day internationals will quit all cricket after India’s second Test against West Indies.

Tendulkar has scored 100 international hundreds in his 24-year career and helped India win the World Cup in 2011.

India, who lead the two-match series 1-0, won the toss and chose to field.

Tendulkar’s final match caps a month-long outpouring of emotion from a cricket-mad nation of 1.2 billion people which started when he confirmed that the series against West Indies would be his last.

Such has been the interest in Tendulkar’s final match that a website selling tickets crashed shortly after opening, receiving 19.7 million hits in the first hour.

Fans have staged protests against the fact that only 5,000 of the 33,000 tickets went on public sale, with the remainder of the seats being filled by politicians, celebrities, former players and corporate guests.

The area around the Wankhede Stadium has been plastered with posters and murals of the player dubbed the “Little Master”.

Tendulkar’s wife, Anjali, has joked that they may require a museum to house all the gifts and mementos.

Meanwhile, tributes have been flocking in from some of Tendulkar’s most illustrious contemporaries.

West Indies great Brian Lara described the India star as “the Muhammad Ali and the Michael Jordan of cricket”. 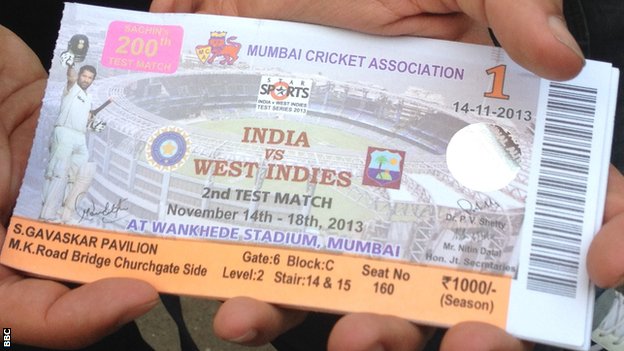 Tickets for Tendulkar’s final match have been hard to come by – only 5,000 went on public sale

Lara, who scored 11,953 runs in 131 Tests, added: “Tendulkar has had the greatest cricket career of anyone who has ever played the game.”

“There will not be another Sachin Tendulkar,” Warne, who took 708 Test wickets, wrote in his Daily Telegraph column.  “He was the best batsman of my generation.”

Indian captain Mahendra Singh Dhoni said on Wednesday that the senior batsman should simply “enjoy his last Test match to the fullest” but there would be “no guarantees” of a fairytale hundred.

As India get set to take on the West Indies in the second and final Test, Dhoni found himself questioned relentlessly on just one man — Tendulkar, who would be retiring at the end of it.

“I would like him (Tendulkar) to enjoy his last Test match. As much as you want him to score a hundred, double hundred or triple hundred, you can’t guarantee performance,” Dhoni said at the pre-match press conference.

“Since this is his last Test match, I would like him to enjoy it to the fullest and may be get a few wickets for us. It will be fun as one expects some turn and bounce from the wicket,” Dhoni said.

Dhoni again stressed that the focus of the team was on the match as there was no point talking about possible distractions.

“It will be one of the greatest matches in cricketing history as it is Sachin’s last game, we need to keep it as normal as possible. There are plenty of things going around. We have done our best to keep focus at the right place. For us, enjoying the moment is the key,” the skipper said.

The most appealing aspect of Tendulkar’s 24-year-journey, according to Dhoni, is how he handled success.

“With due respect to the greats of the earlier generations, they didn’t have to face the kind of pressure that Tendulkar did. It was not only about his success but how he handled it in all these years.

“I have seen a lot of foreign players who can handle on-field success but when it came to handling the off-field pressure, they buckle down. That’s what makes Tendulkar special.”