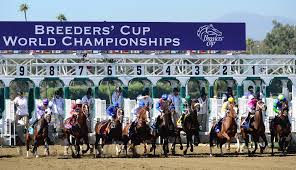 Let’s hope the weather’s a bit nicer at Santa Anita Breeders Cup in California. Today sees Bangor on Dee & Leicester cancelled and inspection due at Redcar. We’ll be building up to Friday and Saturday’s action right here so stick around for daily updates.

Ryan Moore, who rides leading fancy Dank in the Breeders’ Cup Filly & Mare Turf and will also have some decent mounts for Aidan O’Brien, geared up for the meeting by winning last night’s Canadian International on Joshua Tree.

The Fugue has safely arrived in LA , with John Gosden hoping the three-times Group One winner will have better luck than 12 months ago when she was third in the Filly & Mare Turf after enduring a rough passage in the mile-and-a-quarter race.

Although she holds an entry in that race again, The Fugue is more likely to take on the colts in the Breeders’ Cup Turf over a mile and a half.

Good news for flat lovers is that the ‘All-Weather Championship’, which started at Wolverhampton on Saturday night, has received backing from some of the jockeys riding at the first meeting of the rebranded competition.

The £2 million championship will run through to April 18 when it will climax with a new £1 million All-Weather Champions Day at Lingfield on Good Friday, previously a rare blank day on the racing calendar.

Although there has been criticism of Arena Racing Company’s policy of pumping prize-money into a one-off finale rather than distributing it more evenly throughout the course of the year, jockey Jimmy Quinn gave the championship the thumbs up after riding at the curtain-raiser.

“Trainers have brought better-class horses here tonight and winning one of these class 2 races is like winning five average races,” he said. “The more prize-money the merrier.”

Also riding at Wolverhampton was Luke Morris, a regular at the four all-weather tracks. “Fair play to Arc, they have stuck behind the all-weather and hopefully all the trainers and owners will support it,” he said.

The championship meetings will be staged at three of ARC’s tracks, Lingfield, Wolverhampton and Southwell, as well as the Jockey Club-owned Kempton.

We had a nice 9/2 winner in Kingston Hill on Saturday….advised by us this week in The Racing Post Trophy. It finished the ‘official flat season’ off well for us with our full seasons results posted on the link below

With the adverse weather and possibly just one meeting on….we have no information or inclination to place a bet!!!!