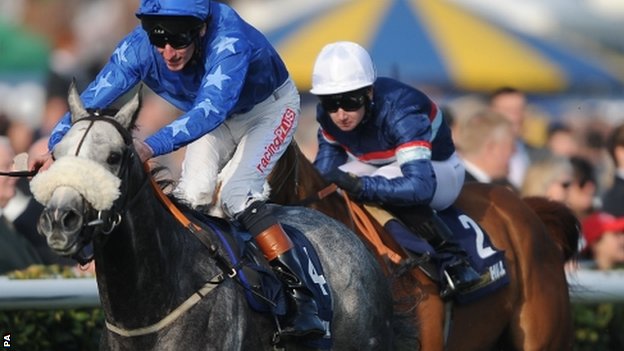 As ever we tend to back our noted horses for 3 runs given conditions are right, plus we’re still checking on our contacts and reviewing worthy ‘notebook performances’ for the season so far……we’ll list those later on so you can follow the ones so far.

Today we have no solid information and none of our 12 flat horses to follow running but as said, we’re giving three for an EW TREBLE or your choice of singles, doubles etc…

Newbury 15.30……we don’t usually back Lincoln winners on subsequent runs, but such was OCEAN TEMPEST’S (above) performance from what was a poor draw in stall 3 we are going to have a small EW nibble. A big danger maybe Frankie on Foxtrot Romeo who had a rating of 114  in 2012. Marco Botti now has him under his wing and off  his current mark is well worth noting.

Thirsk 16.35……we have two of last years performers going here, Sir Michael Stoute sends Stomachion up who had a good back end and the price reflects that so is poor value at 11/4? We side with BAYAN KASIRGA who won three of his final four starts in 2013, Richard Fahey is always bang on with his early season performers so we see value here.

SHEILA’S BUDDY is a best EW price at around 12/1 with BetFred ….where Betfred are offering all new mobile customers a free £10 Sports bet. Once players have used their free £10 bet, they will also be entitled to a £25 Matched Bet.

These are the nags we have highlighted for early season performance where they have looked to have had something in the tank at the end of the race or even ran well from what has been considered a poor draw…..no need to save them….bookmark our page and we will be backing them over their next three outings given conditions are right…

No selection from our TurfMeister in Ireland……

Get a £50 free matched bet with SeannieMac