For as good as Liverpool have been this season, a trip to Britannia Stadium to face Stoke City is no easy task for any team. The Potters have lost just once in their home digs, winning four and drawing five times.

Meanwhile, Liverpool have taken just 12 of a possible 30 points on the road this season. The Reds have been far more dangerous at Anfield. 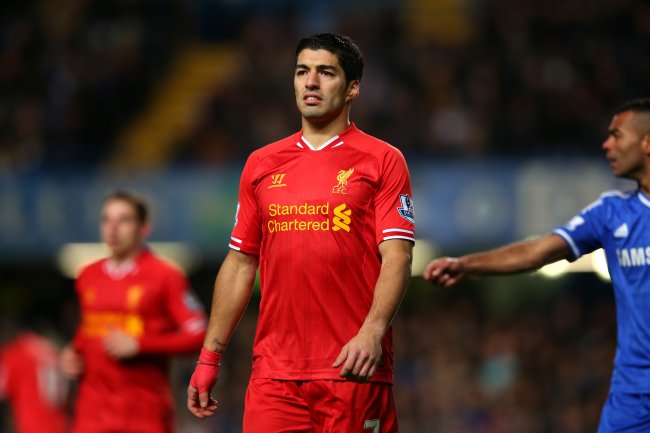 Liverpool fans were surely thrilled when red-hot striker Luis Suarez signed a new contract with the club. They’ll be even more pleased to hear his most recent comments, via ESPN:

I want to play football and I want to help Liverpool win as long as possible. I’m happy to be in the Premier League which is the best league in the world.  This is what matters to me.

As for the financial aspects, you always want to be comfortable for the future because the career of a footballer is short.  I wish it wasn’t so short, but after having lived through some difficult times growing up I’m in a very comfortable situation today thanks to the good work and effort I’ve shown over the last few seasons.

“Today all I am thinking about is Liverpool.  I don’t want to create any controversy or anything.  I am more than happy with my life here and my wife and children are very happy as well.  We are very content with our life.

I am with a spectacular club that I’ve always wanted to play for.  The team is playing well, I feel comfortable on the pitch, I feel comfortable despite what happens in other stadiums.  I love playing here in England and that is the only thing I think about.

All Suarez has done this season is score an astonishing 20 goals and five assists in 15 league matches, earning an 8.68 average match rating at WhoScored.com, easily the best in the Premier League. As always, he’ll be the focal point against Stoke City.

While Liverpool will be without Daniel Agger for this contest, Mamadou Sakho andSteven Gerrard are expected to play and Daniel Sturridge has returned to full training. The Reds are getting healthy once again, just in time to stake their claim on a top-four finish in the second half of the season.

Stoke certainly won’t be able to survive if this game evolves into an open, fast-paced shootout. They’ve scored just 19 goals on the season, and Charlie Adam leads the team with four tallies. The fact that Suarez has more goals in 15 matches than Stoke have in 20 should tell you everything you need to know about the disparity in firepower in this contest.

Still, Stoke are more than capable of playing the role of giant killer. They lost just 1-0 at Anfield against Liverpool. They’ve drawn against Manchester City and Everton and beaten Chelsea. They are not to be taken lightly at home.

Stoke have drawn the seven of their last 11 clashes with top-six clubs, drawing the first half in eight of those matches. Only City and Chelsea have lost fewer games at home than Stoke (1) and the Potters have not lost in their last five home meetings with the Reds.

Liverpool have been rather inconsistent on the road, but it should be highlighted they have played six of the top-eight away from home. There have been at least three goals in 17 of their last 20 away matches. Liverpool have lost three consecutive away matches at Stoke, they have only lost four straight away league matches to Arsenal, Chelsea, Man U and Spurs (both twice).

Only Norwich City have beaten Stoke at home, but given Suarez’s form and the improving health of the Reds, it wouldn’t come as much of a surprise if Liverpool made it two home losses. If they are to hold on to a top-four place in the Premier League, these are the types of matches they must at least take points from.

Expect them to get three. Stoke doesn’t have the firepower to break Liverpool down, and few teams have been able to stifle Suarez this season. This game will be close, but Liverpool will escape with the points, winning 1-0 or 2-0…

Newcastle have lost consecutive Premier League games for just the first time this season, they haven’t lost three in a row since this time last year. Nevertheless, this is the Magpies highest points tally at this stage since 2002/03. They have drawn the first-half in six of their previous eight encounters with top-six sides and haven’t gone in at the break trailing at home this season (W4-D6).

City have started to win away from home which is an ominous sign for their title rivals. They have also won their last eight against Newcastle and lost none of the last 14 encounters between the two sides (W12-D2). The Citizens have had fewer than three strikes in seven of their last 10 matches against top-half opposition and have drawn the opening period in 13 of their last 18 encounters with such opposition.

Aston Villa have lost seven of 11 home matches, conceding first in seven of their last 10 at Villa Park. Only Sunderland have picked up fewer points than Villa at home this season, with no side scoring fewer home goals than the Villains (7). Only Palace have averaged fewer match goals than Aston Villa (2.20 GPG).

Only Spurs have won as many points as Arsenal on the road (22) and the Gunners have won eight of their last 10 matches against middle-third teams on the road. Arsenal haven’t lost in their last 14 trips to Villa Park (D7-L7).

Massive Suarez Offer this weekend at Stoke…..3/1 from 8/13 to score anytime with BETFAIR.…….see later