Vokes and Ings to start

Vokes and Ings to start 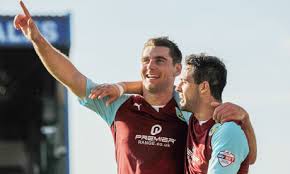 Burnley’s in-form strike pair Danny Ings and Sam Vokes are both expected to be fit for the trip.

Sean Dyche’s men have been fired to the top of the league by Sam Vokes and Danny Ings, who have seven goals each.

The Sky Bet Championship’s most deadly duo have struck 19 times this season to propel the Clarets to the division’s summit yet Ings missed England Under-21s clash with Lithuania on Tuesday while Vokes has been nursing an ankle problem.

They face an Ipswich side who have scored goals themselves this season, although having conceded 15 in their opening 11 games they are only mid-table. The hosts are unbeaten in three and will hope to stay within touching distance of the playoffs with a home win this week

Boss Sean Dyche confirmed the pair are likely to feature at Portman Road, though, with Ings back in training following a knock and Vokes having featured as a substitute for 20 minutes of Wales’ 1-1 draw with Belgium in midweek.

Dyche has welcomed the international break and the rest period has also allowed full-back Kieran Trippier to recover from a knock, leaving winger Ross Wallace (knee) as the only absentee.Mick McCarthy must decide whether to stick or twist ahead of Ipswich’s home clash against Championship leaders Burnley.

McCarthy, still considered among the bookies’ favourites for the vacant Republic of Ireland post, has kept faith with an unchanged side for Town’s previous four matches.

Ipswich have been unbeaten over the last three of those, seeing off Brighton before drawing against Derby and Sheffield Wednesday.

And, with no new injury or suspension problems expected, McCarthy must decide whether to keep faith or mix it up against the table-topping Clarets, with the likes of Carlos Edwards, Jay Tabb and Frank Nouble pushing for recalls.

The Clarets are 2/1 to end a hoodoo against the Tractor Boys, with Sam Vokes 15/2 to score the opener and 5/2 to score at anytime.

Have a look at a free download from the Secret Betting Club…..’FINK TANK FOOTBALL SYSTEM’>>>>>